Will Alibaba overtake Amazon in the West?

Will Alibaba also become dominant in the West?

Alibaba had a great quarter, expanding our user base to 674 million annual active consumers, demonstrating our superior user experience,” said Daniel Zhang, Chief Executive Officer of Alibaba Group. “We will continue to expand our customer base, increase operating efficiency and deliver robust growth. With strong cash flow from our core commerce business, we will continue to invest in technology and bring digital transformation to millions of businesses globally.”

The quote above is from the latest report on Alibaba’s financial results. In the report, the company boasts about its many users, revenue growth, and technical innovation. Alibaba is the biggest in total revenue of all marketplaces globally, and there are no indications of it slowing down. This continues growth, in combination with the departure of Jack Ma – founder and charismatic leader of the company – it seems appropriate to take a closer look at the Chinese challenger of Amazon. In this article I want to provide a broader view at Alibaba’s success in China, and ask whether it will be able to replicate its success in Western markets. The goal is to provide a perspective in which the fast day-to-day developments of China’s biggest marketplace. I will do this by looking at the (dis)advantages the company has in regards to strategy and culture compared to Amazon. However, the topic of Alibaba is too big to discuss every relevant aspect of its successes and challenges. Therefore, I will provide some ‘recommended reading’ for those of you who want to know more.

1.1 How Alibaba became successful in China:

Alibaba was first founded by Jack Ma and a group of investors right before the Dot-com crash in 1999. To be the successful e-commerce giant it is today,  the company needed to resolve two key problems: a lack financial resources, and a lack of trustworthy credit. The first problem resulted in a lack of Chinese e-commerce businesses until funding became more plentiful in the current decade. The second problem resulted in the failure of Western companies like eBay in China where the lack of trustworthy credit resulted in false product information and delivery statuses undermining eBay’s trust and business model.

The company resolved these two problems with the ‘Trustpass Membership’.This programme offers third party retailers on the platform an official certificate of trustworthiness in exchange for 2300 RMB (about 300$) deposit. As a result of this system, customers knew which retailers were to be trusted, creating a safe marketplace environment. In addition, Alibaba gained access to large amounts of cheap capital needed to fund its operations. With these problems solved, Ma’s company became dominant within China’s small and medium  Business-to-Business retail, revolutionising the way in which ordinary Chinese have access to national and global markets.

Once Alibaba had the capital and trust it needed to grow its operations it launched ‘Taobao’ in 2003, a free to use marketplace concentrated on the greater Chinese market, that is, also serving cultural Chinese living outside mainland China. Indeed, almost all Taobao merchants are culturally Chinese. The focus on the sino-ethnic world resulted in minimal service-costs and economies of scale, giving the platform a competitive edge. Taobao is not the only new service Alibaba started in the past 20 years. Alipay, a product that works similarly to PayPal, for instance, provides ordinary Chinese with all the benefits of a cashless society. In the figure below, all subsidiaries of Alibaba are depicted. 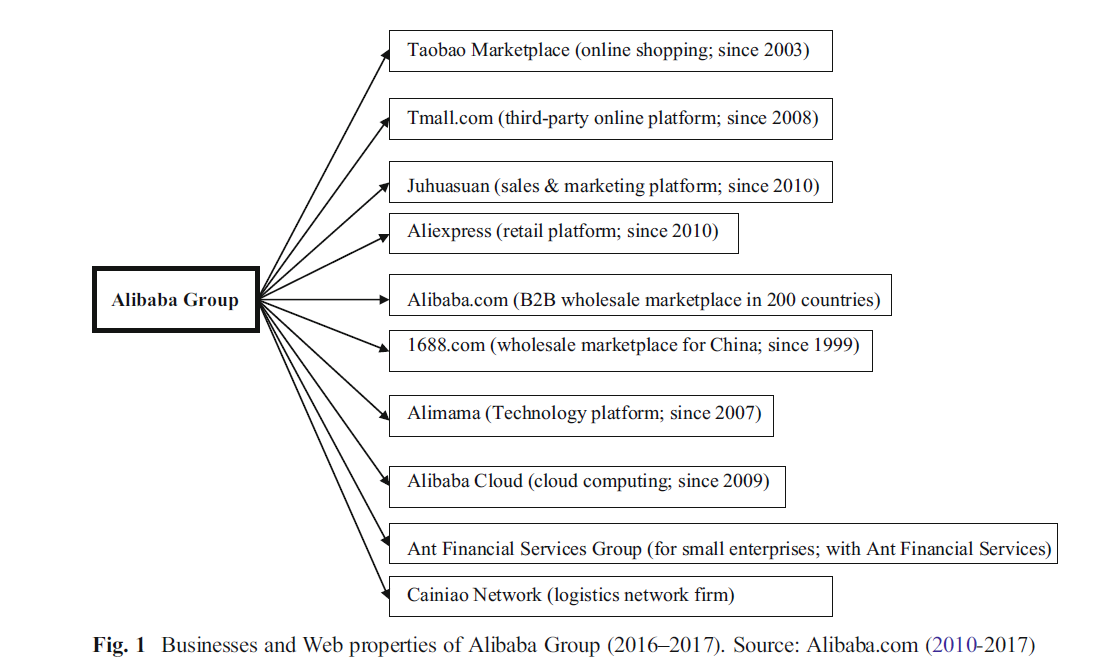 In ‘Why Amazon didn’t make the cut in China’, Mark Greeven and Howerd Yu give two important reasons for why Amazon, with its global reach and seemingly unlimited resources, didn’t succeed in China. Although the reasons for the lack of success of Amazon in China are surely more complex, these two reasons give an important foundation from which to look at the phenomenon.

The first reason is focus. Greeven and Yu state that: ‘There are always a million things a company could do to serve customers better, so it must prioritise. For Amazon, the US will always be the home market, the one to which its investors pay the most attention.’ (Greeven and Yu, 2019). Amazon has had similar problems in culturally similar places such as Latin America. There, they are playing catch-up with local rivals, having problems with cultural and bureaucratic differences. In Brazil, Amazon faces problems with building a network of logistical centres needed to deliver on the promises of the platform. Much like the rainforest from which it got its name, the company is in a constant struggle to remain prominent.

The second reason is more focused on China, Greeven and Yu state: ‘As for Amazon China, it just did not do enough to build a brand reputation and get close to the Chinese consumer. Shopping festivals, discount campaigns, nation-wide red envelope promotions and orchestrated efforts to integrate online entice the Chinese consumer have always stayed the domain of local retailers. Chinese retailers have become the synonym for the new retail movement that is satisfying the increasingly on-demand and location-based needs of Chinese consumers’ (Greeven and YU 2019).

In this section, I’ve described how Alibaba became the dominant marketplace in China. When looking at the core of Alibaba’s success, it is the way in which the company understands the needs of the Chinese market better than its competition, and using Chinese business culture to inform its strategic choices. This is especially true if you compare the company with performance, or lack thereof, of Amazon within the Chinese market. In the remainder of this article, I will explain to what degree Alibaba has been successful within the global market, and if it is likely to takeover Amazon’s dominant position in the Western Markets.

Why it won’t overtake Amazon in the West

The advantages of Alibaba described in the previous section may give the impression that the Chinese marketplace is destined to dominate the globally. However, there are four key challenges that problemises its potential success within Western markets.

In this article I have asked the question whether Alibaba will become dominant within Western markets at the cost of Amazon. The development of marketplaces, both in the West and the East, has been to dynamic to give a definitive answer to predict the future. I can, however, make a broad statement on what I think is likely to happen based on the arguments made above. Surely Alibaba will maintain and increase its presence within Western markets, forcing Amazon to remain competitive and innovative within the region. However, based on cultural differences and current market dominance, Alibaba will likely not take Amazon’s spot in Europe and definitely not in the US. Chinese brand like Alibaba don’t have the goodwill, infrastructure, and capital to challenge dominant Western players like Amazon. In line with this argument, it is perhaps not unthinkable to see a European-native marketplace overtaking Amazon top position  in the future.

But, as always, I’m curious to know what you think. Do you agree with my analysis? Or, do you think that Chinese players will overtake the position of Amazon in Europe? Send your comments and questions to ivo@bandsom.nl, or in the relevant comment sections.

A bit academic, but nonetheless a good overview of Alibaba’s global expansion:

Very readable book on the advantages of Amazon in the West:

I used an article, but it contains more interesting articles on the development of Chinese digital business development:

Get in touch with Imco

Our Amazon specialist Imco is here for you to answer all your questions. Fill out the form and let Imco get in touch with you to discuss what Brandsom can do for you!

Buying (Mr) Bags Summary: in this article, I explain two developments within e-commerce based on the example of Mr Bags. These ...
Start Reading

We help brands with their marketing and sales on marketplaces including Amazon, Bol.com, and Zalando. Our trained marketplace advisers will help you with creating and supporting the integration and optimisation of your brand on marketplaces.